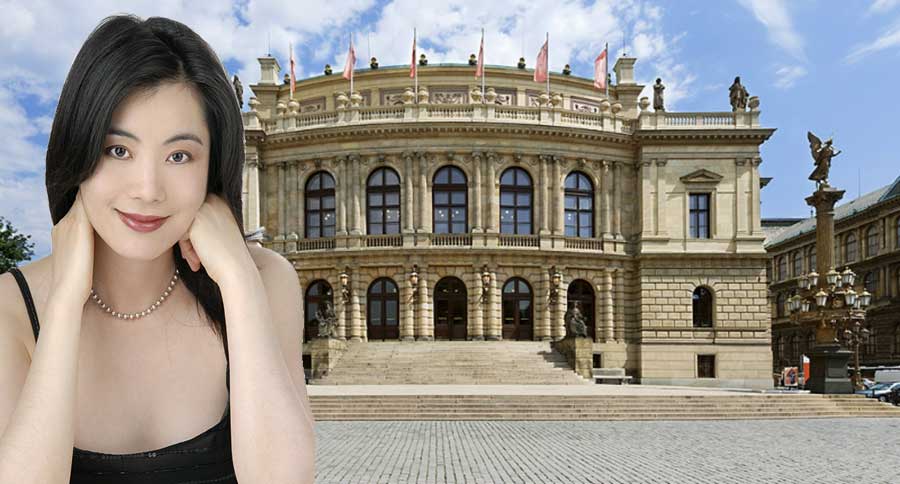 This article originally appeared in Issue 35:1 (Sept/Oct 2011) of Fanfare Magazine

Yongmei Hu began her piano studies at the tender age of five, progressing rapidly enough to be a soloist at the Shanghai Spring Festival by the time she was 10. Emigrating to the U.S., she studied with Nathan Schwartz, Aube Tzerko (the former assistant to Artur Schnabel), and the well-known Russian pedagogue Vitaly Margulis. She has also worked with András Schiff, Leon Fleisher, Richard Goode, and Győrgy Sebők, so her pianistic pedigree is a good one. Her talent has gained her tours through Russia, the Czech Republic, and China. Zubin Mehta became her mentor, praising her musical insight.

The present CD features her in two staples from the pianistic repertoire. By now, Pictures at an Exhibition seems to have gained the status of a rite of passage for many young pianists, and may be coupled with the well-known Schubert Sonata in B♭, D 960, for that reason alone (there are not many couplings of Schubert and Mussorgsky, needless to say).

The Schubert sonata receives a well-considered and -finessed reading, full of poetry and emphasizing the sunny side of Schubert’s congenial musical personality. The repeated triplets in the first movement lack the Sturm und Drang approach that a pianist such as Sviatoslav Richter would bring to them and to the sonata as a whole, but I find her approach to the work quite appealing. If you want a reading full of Gemütlichkeit, this would be a good version for you to consider. Her passagework is cleanly executed and nicely phrased.

After hearing her Schubert, which begins the CD, I was a bit worried that she would bring the same approach to Mussorgsky, which would definitely be inappropriate. I need not have worried: Her Pictures is just about everything that a picky reviewer of this work could desire. The felicitous touches she brings to the work are too numerous to enumerate in toto, but I note that she is one of the most careful performers I have ever heard of this work when it comes to the observation of dynamics and the precise lengths of notes. In “Gnomus,” the contrast in the iterations of the repeated passage between measures 19 and 28 is simply gorgeous, and her sudden outbursts in measure 54 and parallel places are spectacularly frightening. I must also note the beautiful singing melody she produces in “Il vecchio Castello,” and the careful distinction she makes of the occasional dotted notes in the left hand of that movement (as in, for instance, measures 14 and 15). The Schmuÿle section of “The Two Jews” is slower than one usually hears, but nevertheless effective. Her “Great Gate” provides as rousing a climax to the work as that of any pianist I know. I could cite many more beautiful touches she brings to this work.

There are a few faults, the chief of which is the edition of the piece that she uses. I’m not sure which one it is, but it incorporates many of the mistakes and/or changes that Rimsky-Korsakov imparted to the work when he had it published in 1886. Many of these found their way into subsequent editions. Among these are the substitution of a B for the A♯ in the left hand of measure 98 (a particularly grating change, since it destroys Mussorgsky’s beautiful descending line there), substitution of C♮ for C♭ on the second beat of measure 22 in “The Two Jews” (again destroying a gorgeous chromatically descending line), playing E♮ in the last beat in the right hand of measure 18 of the fifth promenade (it is properly E♮ in the corresponding place in the succeeding measure), and so forth. Oddly, however, one of the best-known of Rimsky’s changes, the adjusting of Mussorgsky’s fortissimo at the beginning of “Bydło” to piano, she brings back to Mussorgsky’s original dynamic. Other minor flaws in her rendition are the lack of breathless urgency in “Limoges,” a very common failing among many pianists who have recorded otherwise superlative renditions of the work, and too much pedal in measures 25ff of “Baba-Yaga.”

These defects do not keep this recording from being a very fine rendition of the work, which is in many places as fine as that of any pianist I’ve heard.

Because of the extremely stiff competition for these works, I would not promote this CD as necessarily the one to rush out and buy for either of them, but for those interested in fine new pianists in the younger generation, this CD is well worth exploring. One could do far worse than the recordings of the two pieces on this disc, and they are good enough to reside on your shelf as your only recordings of these two works, if this particular item would fill such a lacuna in your collection.